The Changing Landscape Of The Uplands

The Changing landscape Of The Uplands

The hills and the valleys of the Wicklow Uplands have a timeless beauty. They look as if they have been like this forever. But the landscape has changed dramatically over the centuries. The great forests of oak are almost completely gone from the valleys. The birch, holly and hazel woods are small remnants of what they once were. But many of the big landscape changes are much more recent. Indeed, some of our most beautiful landscape features are less than two hundred years old.

The Vartry Reservoir first came into being in the 1860’s. The Bohernabreena Reservoirs in the Dublin Uplands date from the 1880’s. The Poulaphuca Lakes began to fill in 1940. And Turlough Hill dates from the early 1970’s. They now fit so well into the landscape that they seem to be natural features and there from time immemorial. Well, apart from Turlough Hill, that is.

The stone-built ‘valve’ or ‘draw off’ tower on the lower Vartry Reservoir, constructed c.1865.

The Vartry Lakes add the beauty of water to an already beautiful landscape. And the Victorian architecture adds a romantic touch here and there. From the dam road, the filter beds have settled in so well that they resemble a garden feature.

Before 1860, Dublin had taken its water supply from the canals and the lower reaches of streams like the Dodder and the Poddle. There were frequent problems with contaminated water, water-borne illnesses and low water pressure. The decision of Dublin Corporation to finally tackle the problem was spear-headed by Sir John Gray, an eminent physician, politician and proprietor of The Freeman’s Journal.

The idea of damming the Vartry and piping the water all the way from Roundwood to Dublin, was a typically ambitious engineering scheme of the period. Fearing that there would be speculation in the land if word got out, Sir John quietly bought the land himself.  Then after the project became public knowledge, he sold it to the Corporation for the price he had paid for it. No wonder his statue still graces O’Connell Street.

Work began in the 1860’s. The water was channelled through a four-kilometre tunnel to Callowhill and then through forty kilometres of mains piping to Dublin. The project proved very successful and was improved and extended on several occasions up to the 1920’s. The Vartry has not only supplied drinking water to the people of Dublin and Wicklow for a century and a half, but the lakes have become a major recreational destination with the development of the Vartry Reservoir Trails.

The upper Bohernabreena Reservoir constructed in the 1880’s to provide a clean drinking water supply. Also in the photo is the outlet tower and spillway.

The Rathmines Township local authority decided not to throw in its lot with Dublin Corporation’s Vartry scheme. They regarded the water as too expensive for one thing. So, in the 1880’s they developed the Bohernabreena (or Glenasmole) Reservoirs. There was more than one purpose here. Clean drinking water was certainly needed. But the River Dodder was also prone to both drought and flooding from time to time. To solve both problems two reservoirs were constructed. The upper one collected the clear water from the sides of Glenasmole Valley for use as the domestic water supply. The brown, peaty water from the hills around Kippure was channelled past the drinking water reservoir to a lower reservoir where it was used to regulate the flow down to the mills which were in operation lower down the river. There was at this point, between forty and fifty mills in operation on the Dodder, all using the sustainable energy harvested from the flowing water.

Glenasmole is a beautiful valley with a very strong and ancient association with Fionn MacCumhaill and Na Fianna. The hills surrounding the valley have recently been incorporated into the Dublin and Wicklow National Park. Here too we now have excellent walking trails along the reservoirs, including part of the Dublin Mountains Way. 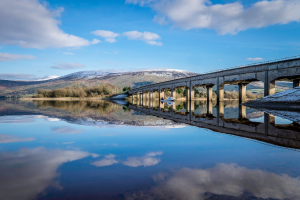 The Valleymount Bridge across the Poulaphuca Reservoir which was constructed following the flooding of the valley in 1940.

From Church Hill or Moanbane, the view of the Poulaphuca (or Poulaphouca) Reservoir, also often referred to the Blessington Lakes, is spectacular.  The waters look like a totally natural part of the countryside. It is now hard to believe that beneath those calm waters lie the remnants of farms, roads, bridges, village, church, graveyard and even a famous holy well. Yet here there was a vibrant, living landscape only eighty years ago.   Until the waters built up behind the new Poulaphuca Dam in 1940, this was home to the Cullens, the Mileys, the Byrnes, the Twyfords, the Quinns, the Hanlons and many, many more.

The valley did have a lake before, of course, – a meltwater lake towards the end of the last Ice Age. But this was different, there was a community living in the valley. So the little village of Ballinahown was submerged. The burials from the graveyard of Burgage were reinterred. Saint Bodin’s Well in Lacken, with its two magical fishes, disappeared beneath the water. That is until it re-appeared briefly during the drought in 1978.

The idea of a dam at Poulaphuca Falls was not new. A Government commission in 1919 had already proposed the area as suitable for a reservoir and power-station. But it was the water shortage in the mid-1930s that really gave life to the scheme. And the Falls at Poulaphuca could be harnessed to provide a second, and of course, highly sustainable, energy source to augment the great Ardnacrusha Electricity Scheme on the Shannon. The ESB, Dublin Corporation and other local authorities, with strong Government support, took on the project. A total of about 5,000 acres were flooded, the largest area ever lost to a single development in the State.

There was certainly some local resentment and a number of ‘protest’ meetings were held in the area during 1938 and 1939. The main focus of the resentment was the level of compensation being paid to householders and landowners. And looking back through the records now, it is clear that they were not treated anything like as fairly as they might have been. The removal of the remains from the old graveyard was also a cause of concern. But otherwise there seems to have been general public support for the scheme. An interesting speculation would be to consider what the reaction to a scheme of this scale would be today. [Chris Corlett’s wonderful illustrated book ‘Beneath the Poulaphuca Reservoir’ gives a vast amount of information on the area before the waters came.]

The Poulaphuca Waterfall, which was such a tourist attraction at the end of the old tramline, is no more. But we will soon have another recreational gem in the form of a 42 kilometre Greenway around the reservoir.

Turlough Hill was completed in 1974. There was no community here to re-locate. A storage reservoir was built right on top of the hill. At periods during the twenty-four hours, when demand is low and there is surplus electricity generation, the water is pumped up from Lough Nahanagan into the storage reservoir. Then at times of peak demand the water flows down into the lake again through generating turbines hidden within the mountain.

The scheme has proved highly successful in balancing the demand for electric power between the periods of high demand and surplus generation.  Another example of a more sustainable approach to electric power. But the effects on the landscape are hardly positive. The hill-top storage reservoir stands out as an artificial feature from most viewpoints in the surrounding hills. And what was a little gem of a corrie lake, Lough Nahanagan, now always seems to be only half-full. A more curved profile on the storage reservoir would fit in better with the surrounding hills. But it is most unlikely that anything can be done to make the half empty lake, with its water monster, look natural again.

The value contributed to our society by the Uplands and the Communities who live there, is easy to underestimate. Where would our capital city be without fresh water from the hills? And we have two highly sustainable forms of electricity generation as well. Few cities are as lucky as Dublin to have an area of such natural beauty on their doorstep. The Vartry, Bohernabreena and Poulaphuca Reservoirs, in addition to their primary purposes, are now priceless areas of recreation. They are developments that are not only highly successful in their own right but are providing a valuable resource to their communities and to visitors alike. Change is not always for the worse.

Click Here To See More Articles From This Newsletter

This newsletter and many of the previous publications are available online to view and download as PDF files directly from the Wicklow Uplands Council website.

CLICK HERE to view the full selection of newsletters dating back to 2006.