Designed to strategically manage the ever-growing deer population of Co. Wicklow, this project commenced in August 2018.

In 2018, Wicklow Uplands Council signed a three year contract for the provision of Sustainable Deer Management Services in Co. Wicklow. Jointly funded by The Department of Agriculture, Food and Marine and The Department of Culture, Heritage and the Gaelteacht, the project follows several years of extensive study and  addresses what is widely considered to be an ‘unsustainably high deer population’ found in Co. Wicklow.

The contract, which is strategically managed in conjunction with Wicklow Deer Management Partnership, has seen the establishment of five Deer Management Units (DMUs) throughout the county. Each DMU oversees the management of the deer population in their area using local knowledge on the terrain and deer habits unique to their locality. 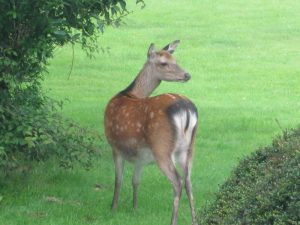 The signing of the contract followed a tender competition that took place in early 2018, and was due to run for a three year term.  The closing date for this contract is 31st March 2022. The establishment of a baseline of both the population and the challenges it presents, along with regular written reports are a feature of the project.

A final report on the project will be available for viewing shortly.